Running With Bulls Under the Fair Lights

Throughout the cantons of Guanacaste, Costa Rica, the end of the year brings parties across the northernmost province. Semi-trucks, carrying parts to rides and booths, make their way into the small towns where surfboards are carried on the sides of motorcycles and it’s not uncommon for horses grazing on the roadside to stop traffic.

Drawing locals from surrounding communities and tourists on vacation alike, the festivals go on for around seven days in each of the towns with vendors and rides bringing visitors to the grounds nightly.

Each night, the excitement at the center of these parties is the bull riding, which is held under the lights.

Though in Costa Rica, the practice differs from traditional bullfighting or American cowboy competitions, the influence of Spanish colonizers is continued by local young men during each night of the towns’ parties.

Rows of sunglasses, masks, light-up swords and necklaces are all on display and for sale at pop-up shops and the smell of meat cooking on open grills makes even full stomachs think they need to eat.

Among the rusted mechanical rides, which light up and clank in the night, one large wooden structure surrounded by seating is erected in each of the towns, just for this event.

In the weeks leading up, men from the neighborhood assemble the large arena in fields or town squares. From just a few large beams in the ground, the shape transforms daily until it takes its final form.

The gaps on the outside of the structure are covered with tarp and thin plastic to prevent those who haven’t paid from watching the spectacle. The rows of seating are steep above the circular wooden corral where the action takes place. The bull, its riders and the ballsy runners have this whole circle, about 100-feet in diameter, for the night. Viewers on the ground level are separated from the action by a tall fence, tiered for easy climbing.

When the announcer finally calls out to the crowd, the wooden surround seating is nearly filled to capacity.

It’s doubtful that there is a number appointed by a fire marshall for the capacity and the bottom row viewers position themselves atop of the corral with their legs dangling over the edge. It’s twice the price of admission to be in the bleachers than it is to be on the ground, where you have access to the climb the corral. While paying the equivalent of less than four dollars for the lower section, I wondered why anyone would want to see this from farther away, let alone pay double. “Wrap your legs like this,” an older man sitting along the corral next to me says while demonstrating how to keep balance seated seven feet in the air.

My straddling position, with one foot on either side of the coral makes me feel safe, but becomes more uncomfortable having to turn to look over my shoulder.

The man brings both his legs to the front so that he is facing completely forward. He bends his knees slightly and tucks his feet underneath a lower beam with the tip of his boot flexed up for stability.

He says that he wouldn’t be jumping in the ring this evening but that he used to when he was younger.

The local boys, most appearing to be between their late teenage years and earlier thirties, pace along the outside of the ring in anticipation.

“If you don’t want, you are never in danger,” one of them says in broken English. He means that with one bull in the ring and many targets, one can manage to stay away from the animal at all times.

“Danger” is a subjective term during the event.

The animals are released from a pin into a ring with a rider on top. Under the lights and in a fit of rage, the 1000 plus pounds of beast bucks around the ring, trying to shed the extra weight. The riders, who I’m told are professionals that travel to the events, wear face gear and other pads. Once the rider is thrown off or decides to climb off on their own, they duck under the safety of the corral, then it’s time for the locals to earn their adrenaline. If the boys see that the bull is coming for them, they quickly climb up the wooden barrier out of the horn’s reach. This is what the man means when he says, “never in danger.” Hanging a few inches above the animal on a rickety wooden fence.

However, the pride and excitement in the evening builds from those brave few who get close to the animal and taunt the great beast. Once it’s riderless, the animal sometimes moves to the middle of the ring, takes in the noise and searches for a new target. The locals taunt the bull, clapping and jumping in front of the animal to start a chase. Many of the chases end with the taunter sliding, at full speed, under the corral and away from danger. If the bull comes to the perimeter, the onlookers lift their legs and grab on to the fence tightly.

Racking along the length of the wooden beams, the animal continues looking for another waving target. From above, the boys taunt the bull by swinging their legs down and kicking it as it runs by. 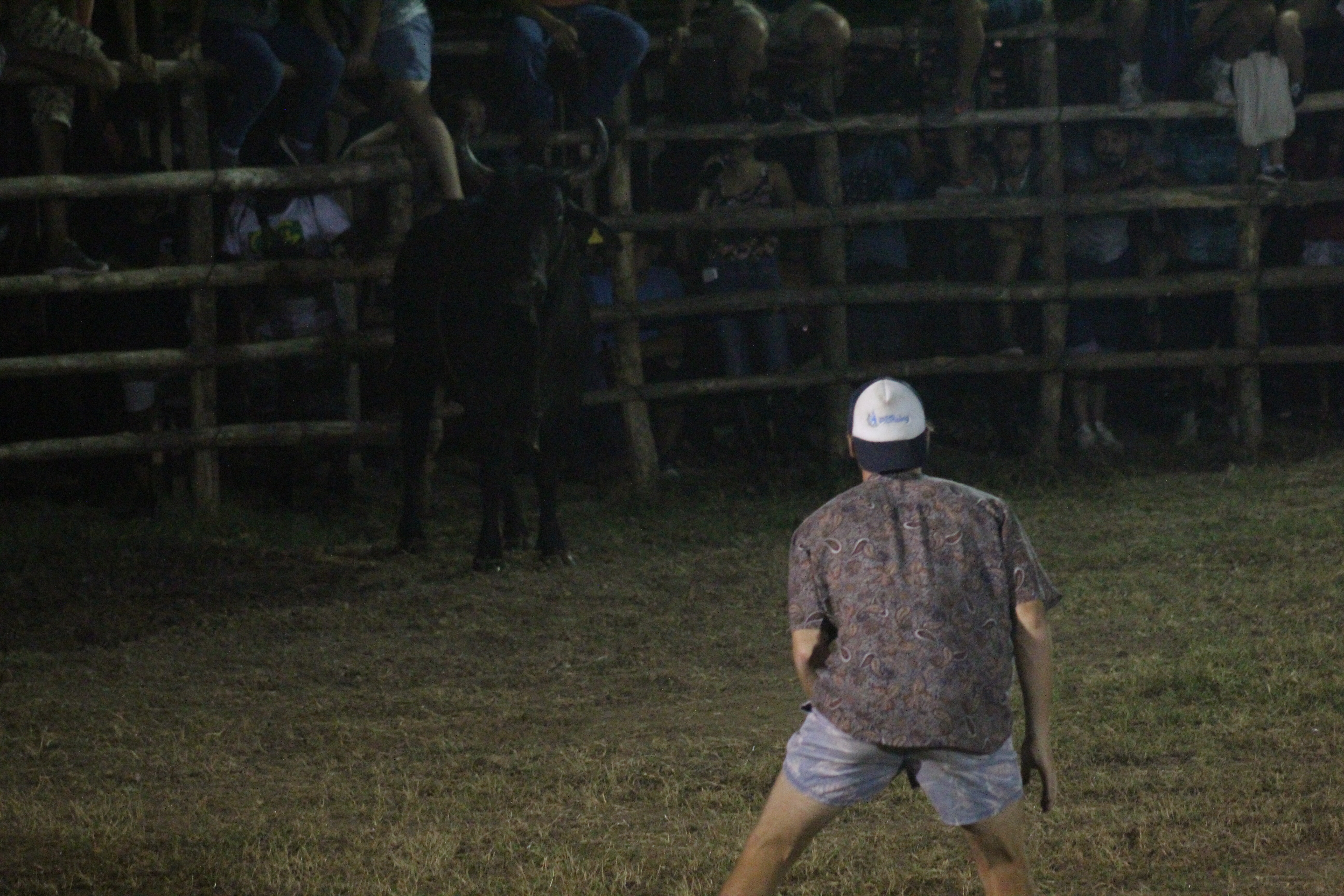 The outsiders also join in and slap the bull from the safety between the slots.

When the animals’ focus turns in my direction, due to spectators next to me heckling, I begin to think that paying another four dollars for the security of my life might have been a good idea.

Unlike traditional bullfighting, I’m told that the animal isn’t killed. Once the bull is tired, cowboys on horses ride in to lasso the animals and take them out of the ring so that a fresh beast can enter.

Gory injuries can obviously happen, but with many people running to distract the animal, it seems they rarely do. Bruises from stomping are seemingly more common and a team of paramedics constantly survey the action to help an injured runner.

Some of the young men, those jumping around and calling the bulls’ attention show bravery, some tripping over their feet and shoving others, show that alcohol may have influenced their decision to enter the ring.

It’s rumored that cash bets float between the runners, but otherwise they to risk their health strictly for the pride and tradition.

With high fives and back slaps exchanged after every near encounters with the creature, it’s obvious that many of the men have grown up dashing around in these rings for their entire lives and will continue to until they are older and slower.

Then they will take their place on the corral to cheer on the younger generation.