“Fuck, that is a cop. Don’t run it will look suspicious!” A cheap bottle of vodka was thrown into the bushes and a very inebriated senior citizen who had just purchased it limped towards the road without looking back. Despite our new drinking partner’s sudden exit, we all accepted Matt’s command and stayed put. As if nine boys in the back corner of a supermarket parking lot at eleven o’clock wasn’t already suspicious.

In order for coming of age stories to be successful, they need to spark recovery of a personal memory and remind the viewer of an exact moment of their own life. 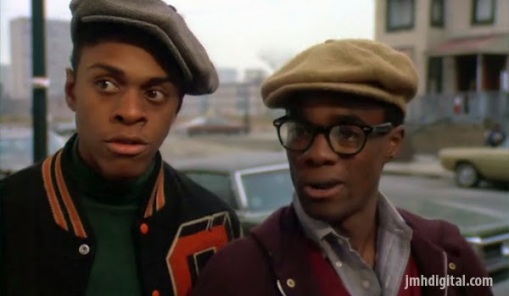 To build a relational bond between story and audience, creators must incorporate fine details of setting. Effectively evoking emotion can be achieved through use of specific language, character development and coordination of relevant music. Viewers should be left feeling like they are able to relate to the film, even if on the surface, it shares no obvious connections to their own lives.

In the case of Cooley High, repeated teen film tropes are effectively used to reflect teenagers lives while focusing on a very specific time and lifestyle. Interestingly, diverse audiences can associate their own feelings and memories of being 18 to those in the film.

The pursuit of sex, disconnection from adult authority figures and unlawful activities are themes that have been used in many teen movies throughout the genre’s history. What separates Cooley High from other films about kids growing up, is that the story takes place in an inner-city and focuses on lower income protagonists.

Where as many stories of the American teen were created from boredom in suburbia, this movie, released 40 years ago, exemplifies certain coming of age traits that know no geographic or ethnic boundaries. To this day, the 1964 story about black youths in the city is able to successfully create a relationships to it’s viewers.

Even in contrast to a white male raised in a different time and a different place, the saying “boys will be boys” is applicable when constructing bridges between my own life experiences and those of the main characters.

I don’t really know what it means to be “jive” and I’ve never been to Chicago, but I believe the actions of Cochise and Preach resonate with myself because of common thought processes that males around that age go through. We played sports and ditched class, but we called each other “dingus” when trying to cause insult. The pursuit of sex, booze and theft were all things that I experienced in high school. Even if these mischievous situations of my past didn’t involve me personally committing the crime, during the course of watching this movie I was able recollect similar situations to those presented.

The reason that Cooley High is as relevant today as it was in 1975 is because everyone who has lived through high school should be able to feel some connection to the characters and their experiences. Individual stories will vary with settings and specifics, but young men approaching the end of high school deal with a range of emotions and complex decisions that are very accurately portrayed in this film

View all posts by Eli