If you have ever looked at a tabloid, watched television commercials or listened to the radio, chances are you not only know who Beyoncé is but also have an understanding of her power in America. Girls look to Queen B as an icon of our time.  She’s married to a semi-successful dude, has a chart topping voice and is an inspiration to the American People.

Being a superfan doesn’t mean what it did ten years ago.  Back then you had to travel to see a show or buy a poster at your local target.  Now thousands of pictures of celebrities faces and recordings of concerts can be found at the tip of your fingers. Like most celebrities, Beyonce’s Instagram account gives her fans a behind the scenes of what’s going on in her life.  From family shots with Jay-Z to high-end photo ops, B’s profile only has the highest quality posts that all of her 22.5 MILLION followers can see daily.

Naturally, with numbers that high, each of your pictures is bound to average six-digits on the “like” counter but the comments section is where things get interesting.  Beyonce’s account is public which means anyone, I repeat ANYONE has the ability to say whatever they please.  Through a mixture of bored nights and my hobby of cyber creeping on people (a habit more common than you all care to admit) I’ve gathered some of the best comments on Queen B’s pictures, as well as original posts from these commenters, AS WELL AS some interesting other pictures I found following from the Beehive.  Captured, Filtered and #hashtagged Enjoy: 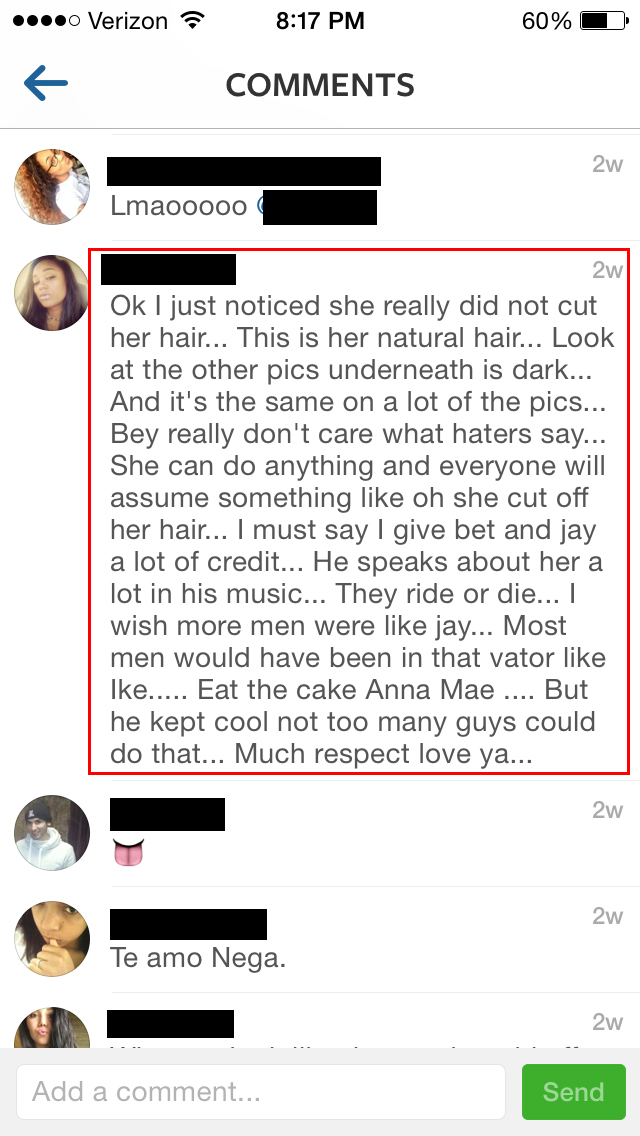 The fashion guru thoroughly examining the inch by inch frame.  Though the point that this is B’s natural hair is seemingly lost to a 21 year old male like me, I can respect her approval of Jay-Z.  In this day of fake bitches and players, who isn’t looking for their “Ride or die?”  Not sure what she means by “Eat the cake Anna Mae…” but that didn’t stop me from diving into her public pictures! 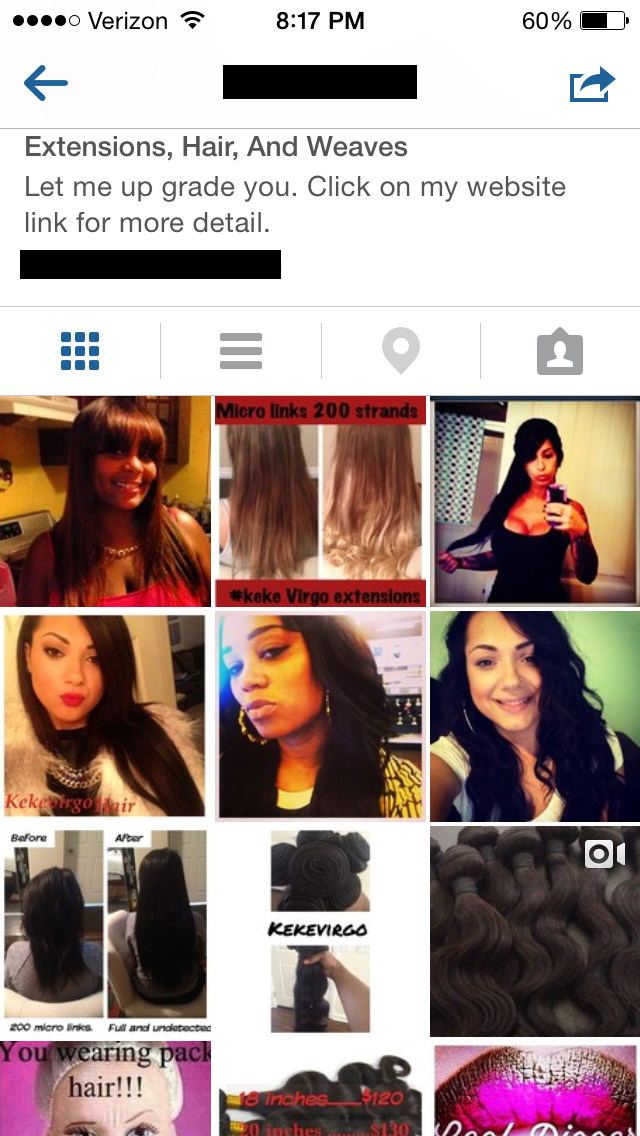 Specializing in “up grading” she’s got the cred for telling us how it really is in the lime light.  I didn’t find a self-promotion comment on any of Beyonce’s profile from this user, which is respectable but I think that with some better lighting in the selfies and perhaps a “how it’s made” 12 second video on weaves, skeptics like myself would seek out her help next time we were looking for an up grade from a fashion pro. 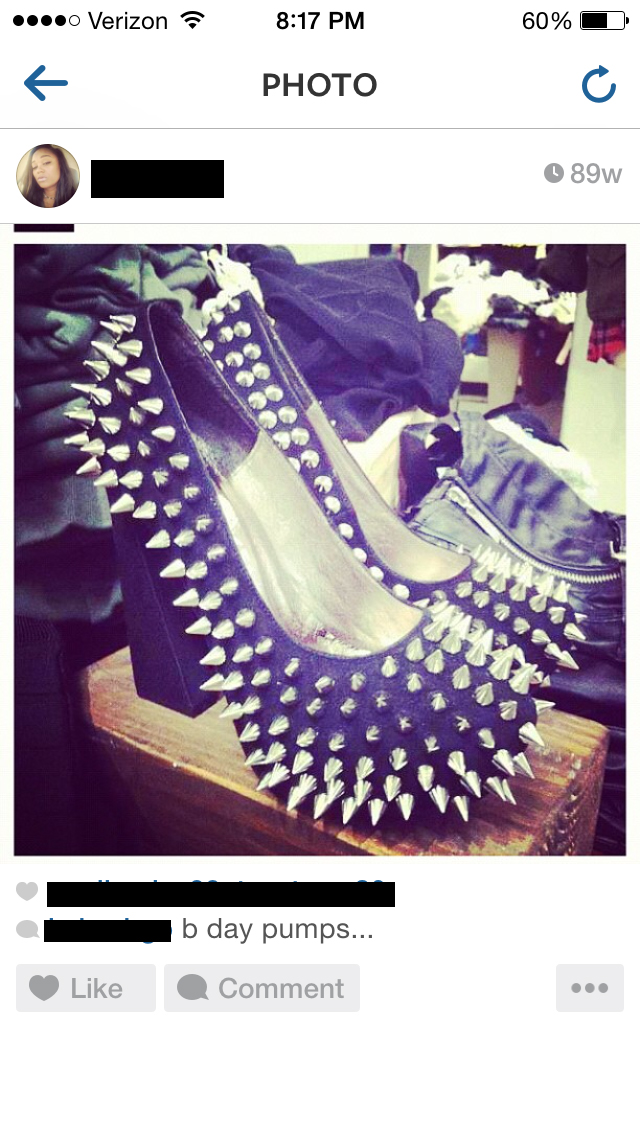 Occasionally, on famous people’s Instagram’s you will find a prayer for loved one or an ask for help from the celebrity themselves.  Since most celebrities don’t respond to fans comments I’d assume they hardly even look at them, so I’ve never really understood this either.  Maybe [Beyonce] is the only person who can help people or perhaps her social image has transformed from illuminati to healing shaman.  Either way some users find comfort in asking her for help: 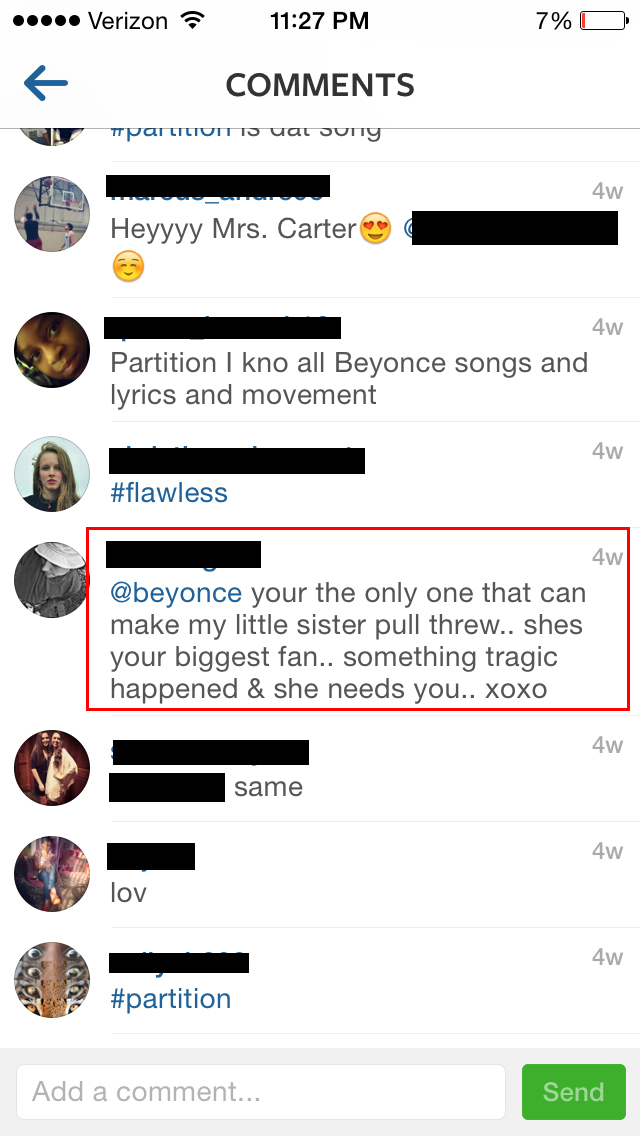 This comment caught my attention and interest.  Was his sister really in trouble? Or was this a shameless troll?  I went to his profile to try and find the answer out for myself and my research was inconclusive.  I have a slight idea that it was the latter of my two guesses but I feel bad just incase so I decided to scope some of their pics. 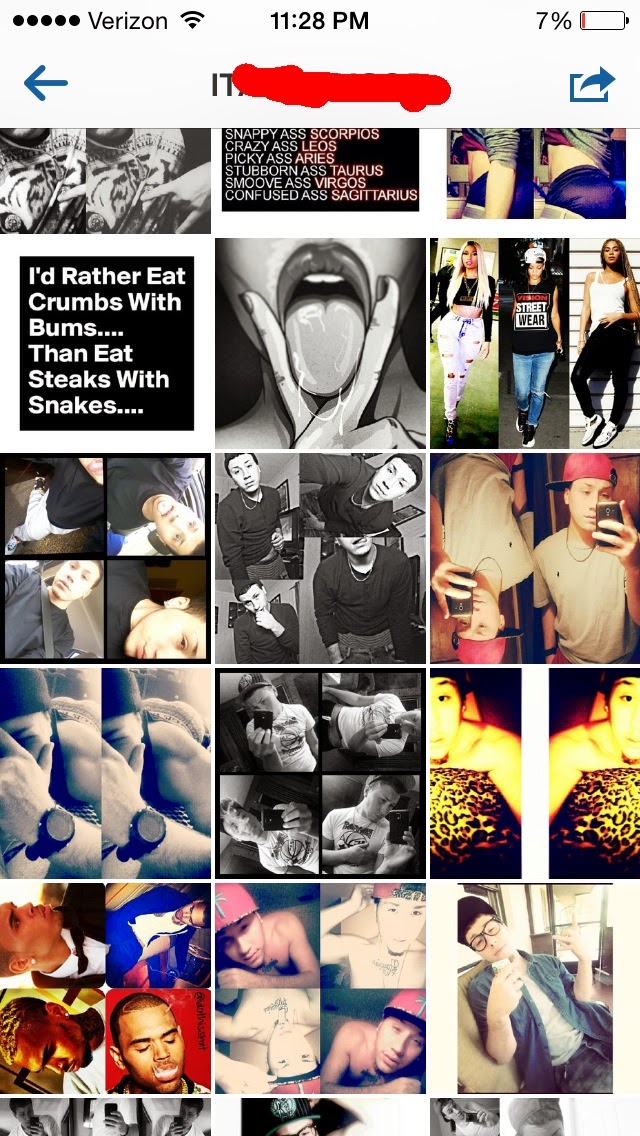 This seems like a cool guy!  Not only does he have “Kalidaselfie” skills but also managed to slide a compilation of Chris Brown photos nearly unnoticed into his feed.  (Insert 100 emoji)

Now not all fans are as courteous (possibly deceiving) as the last was… Others prefer a more direct approach at Queen B’s attention. 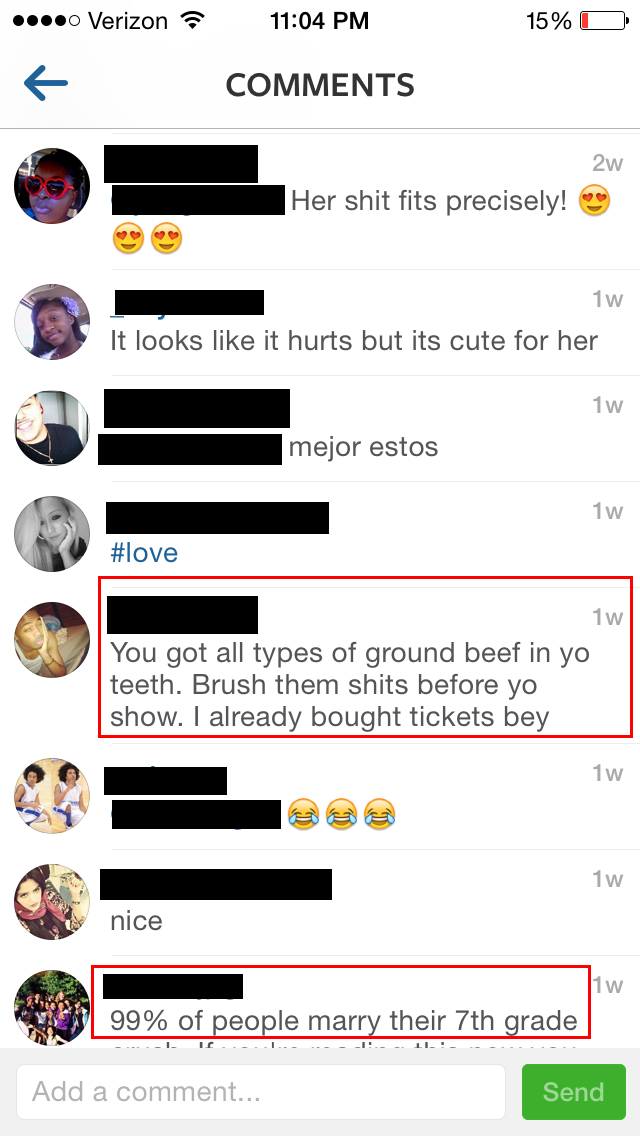 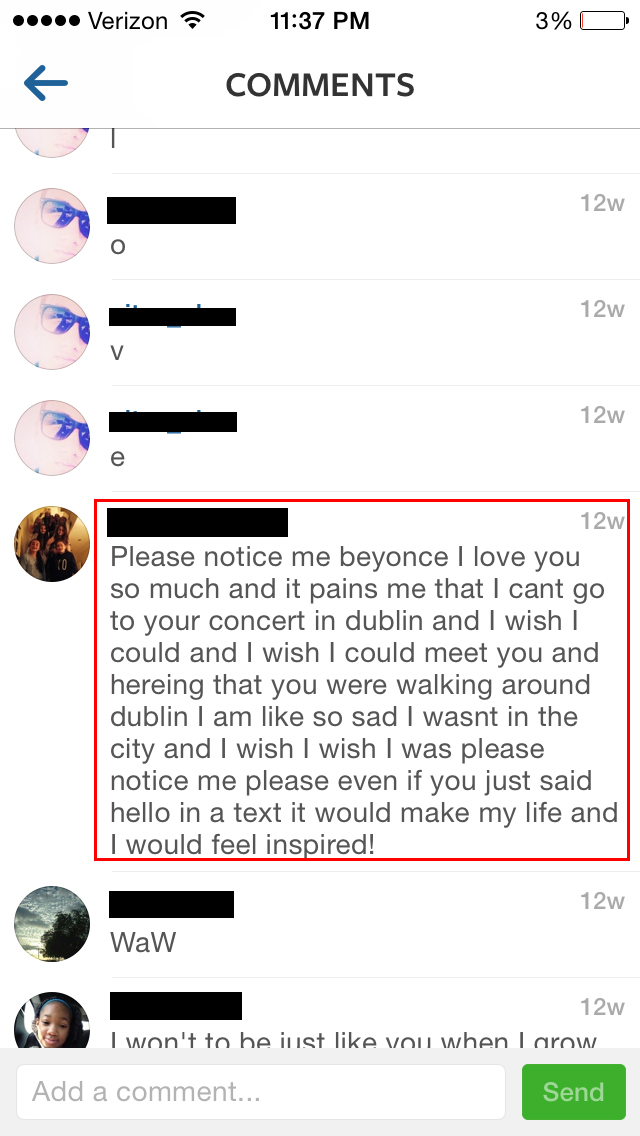 These pictures are just a few of the crazed fans trying to get attention, a large part of Bey’s comments come from her supporters. It was refreshing to find that some of them actually just want to express their concerns for her well being. 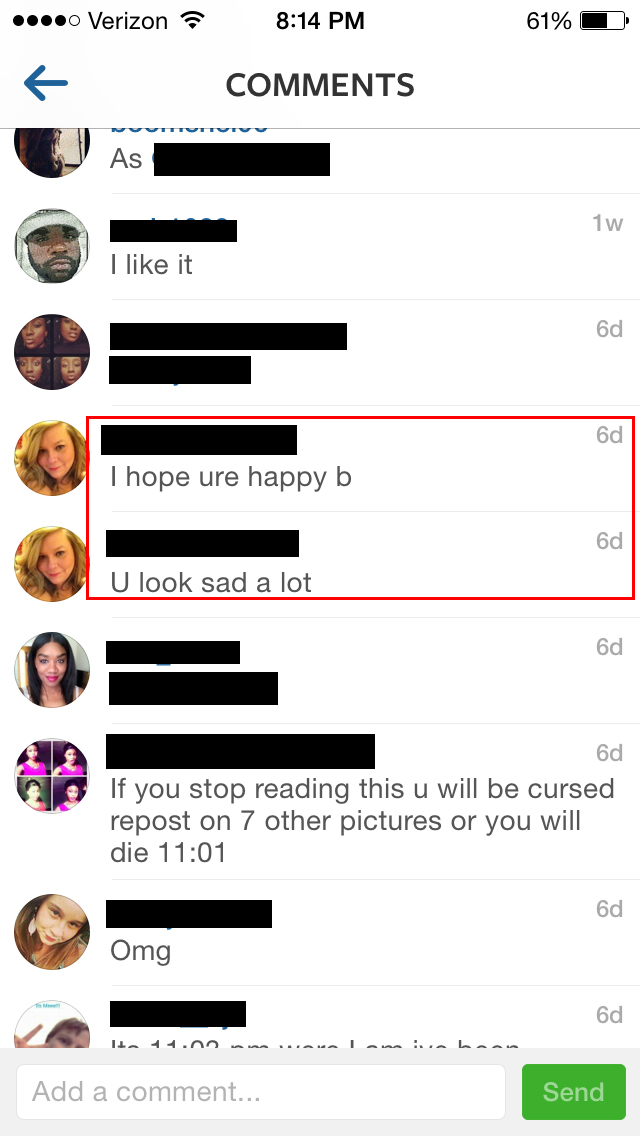 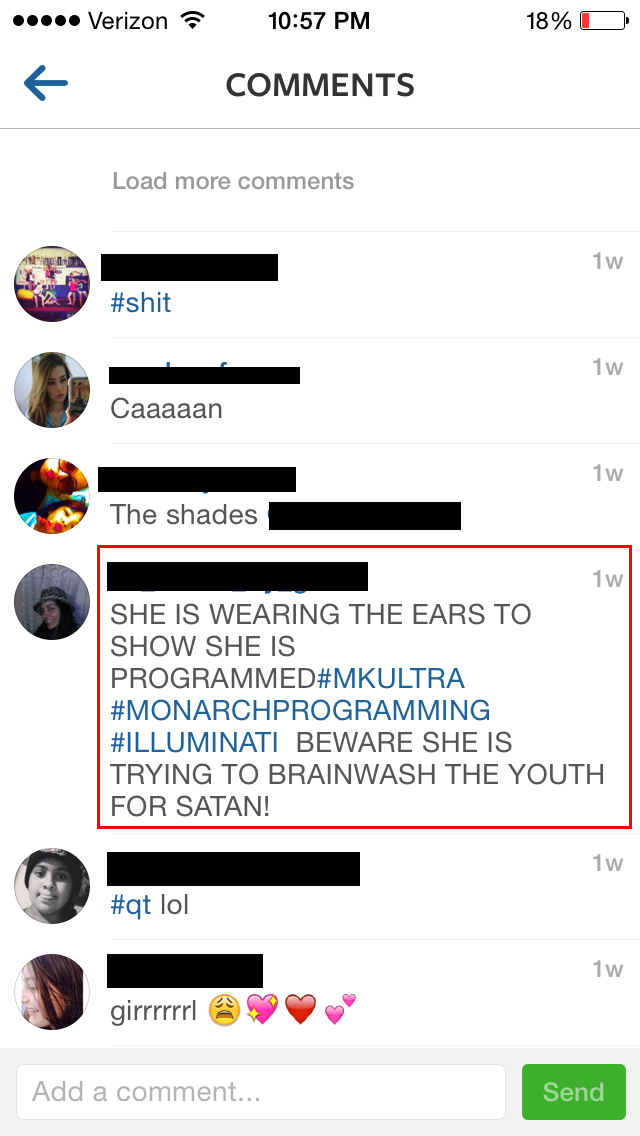 (BTW I requested to follow the account above due to immense curiosity of their posts. but unfortunately it is on private and I’m still waiting for the nod)

Some people make death threats or pick apart B’s pics but there will always be a dedicated force to protecting her. 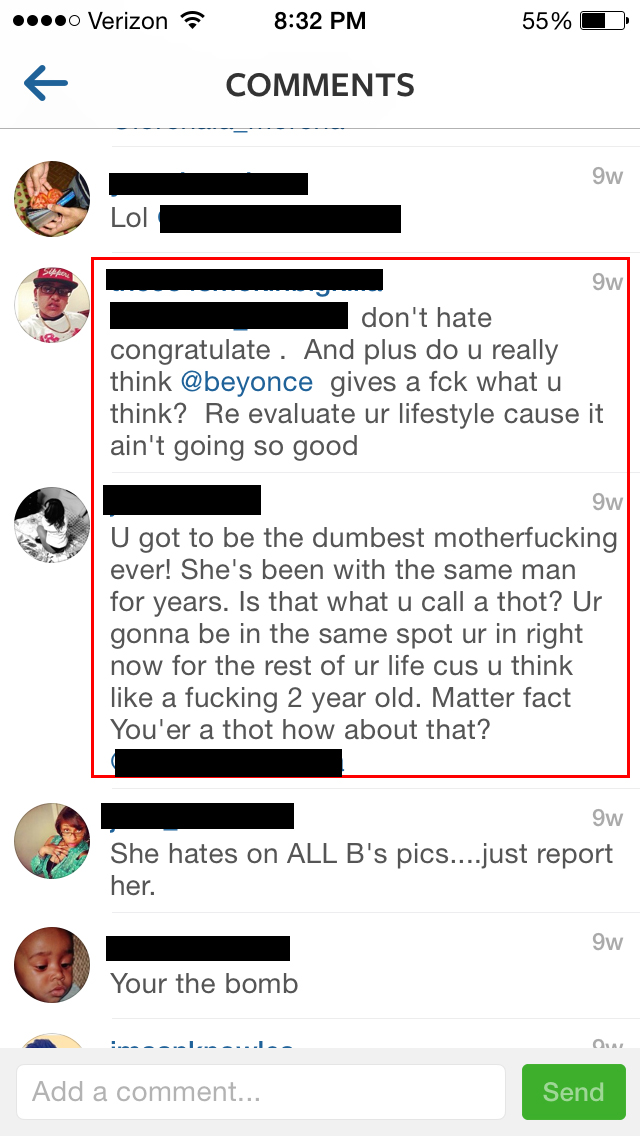 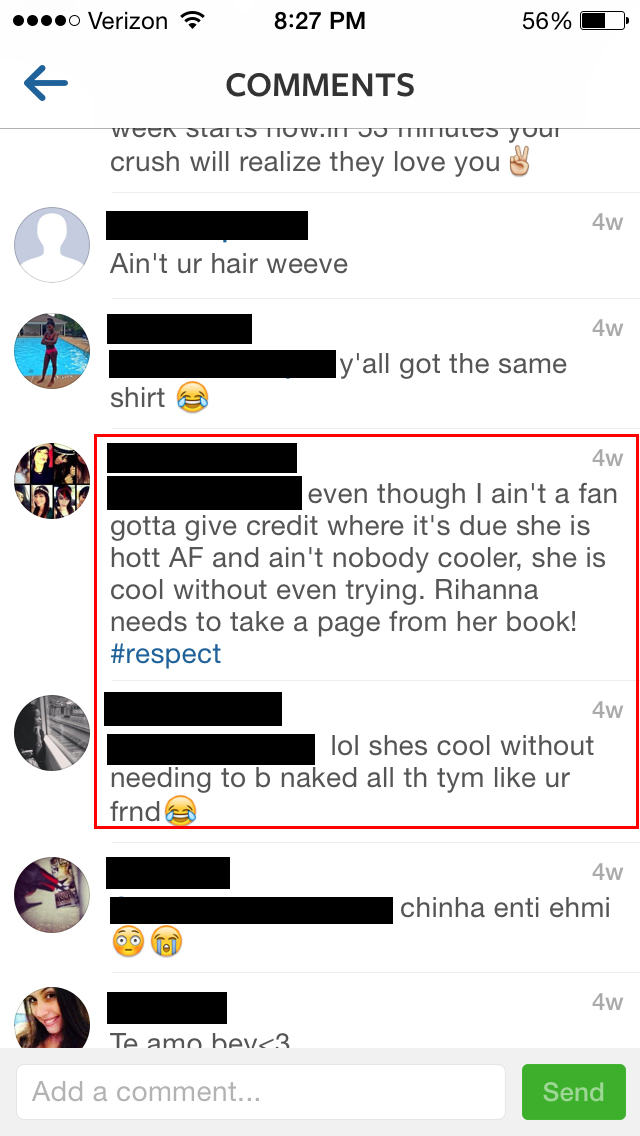 The most interesting fans seem to be the ones asking the most meaningful questions. 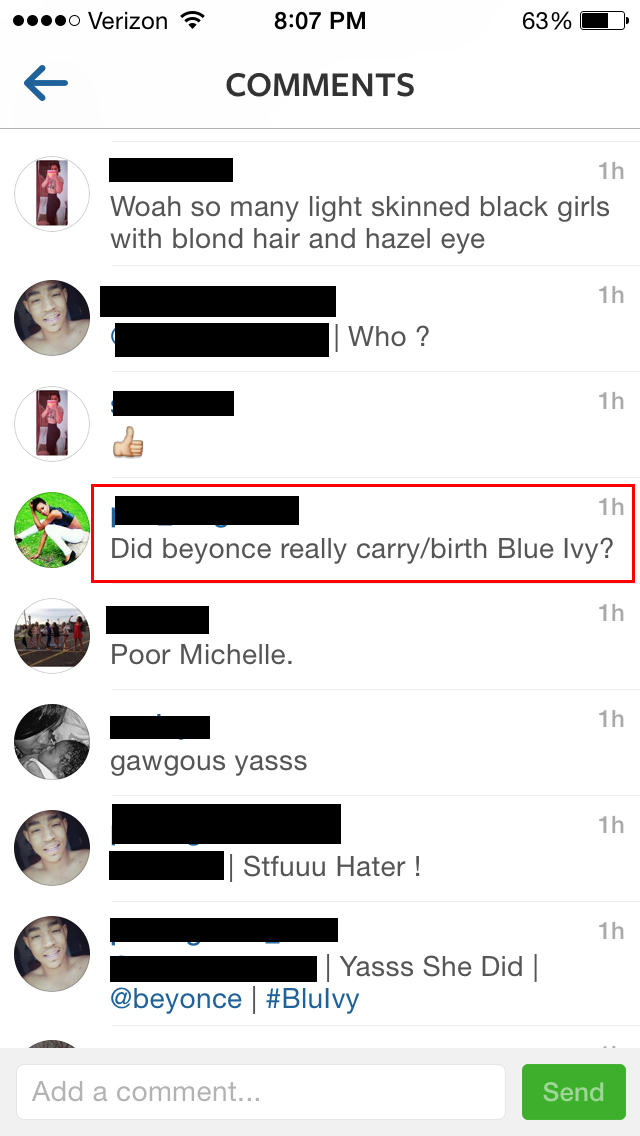 Personally, I do believe that Beyonce really did birth/carry Blue Ivy.  I know that it’s difficult to trust any form of media today but with workout instructors that make Jillian Michaels look weak and access to five-star healthy foods it wouldn’t be hard for the motivated Queen B to whip right into shape after birthing her child.  I found this commenter (who’s user name has a reference to Tupac) to be another character of interest so I checked out her public profile.

Most of her posts were of equal ratio between pre-made picture quotes about trusting the lord/ about being a bad bitch, but there were a few personal shots thrown in the mix. Like this one! 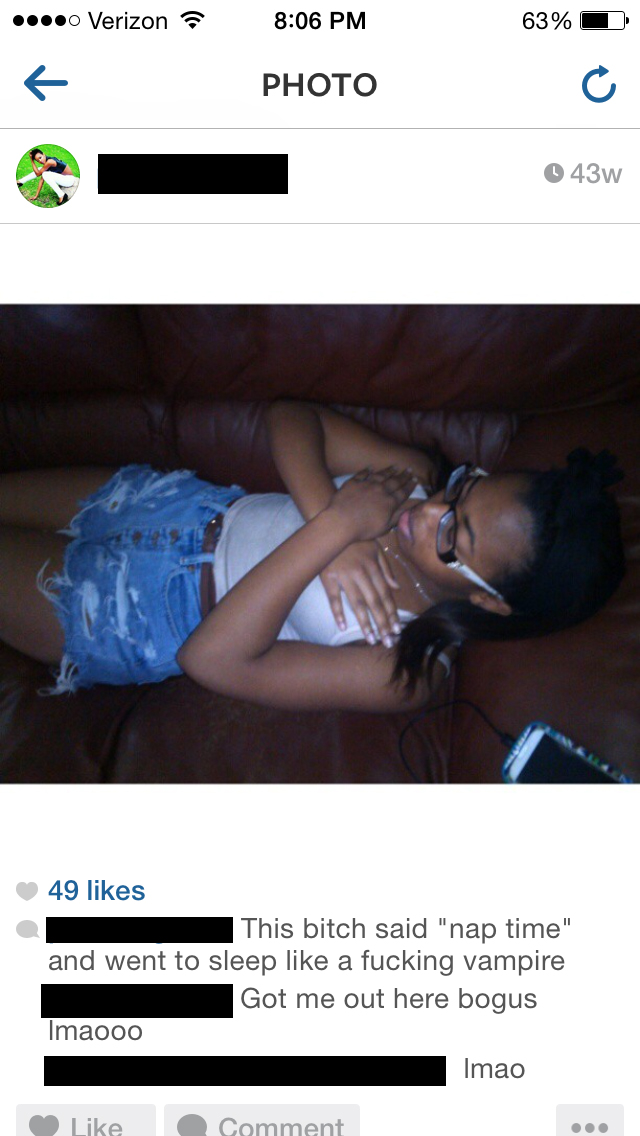 My research into all that is Beyonce left me with more questions than I had started but I am not discouraged.  Delving deeper into celebrity culture is a slippery slope because, I myself do not want to become one of the crazed fans but on the other hand, am determined to learn the truth. Being a fan of the fans has given me hope in this cutthroat cyber age of retweets and favorites.  About the only thing I positively learned from this study is that 99% of people marry their 7th grade crush.

Now here’s some random gems I found during my research! 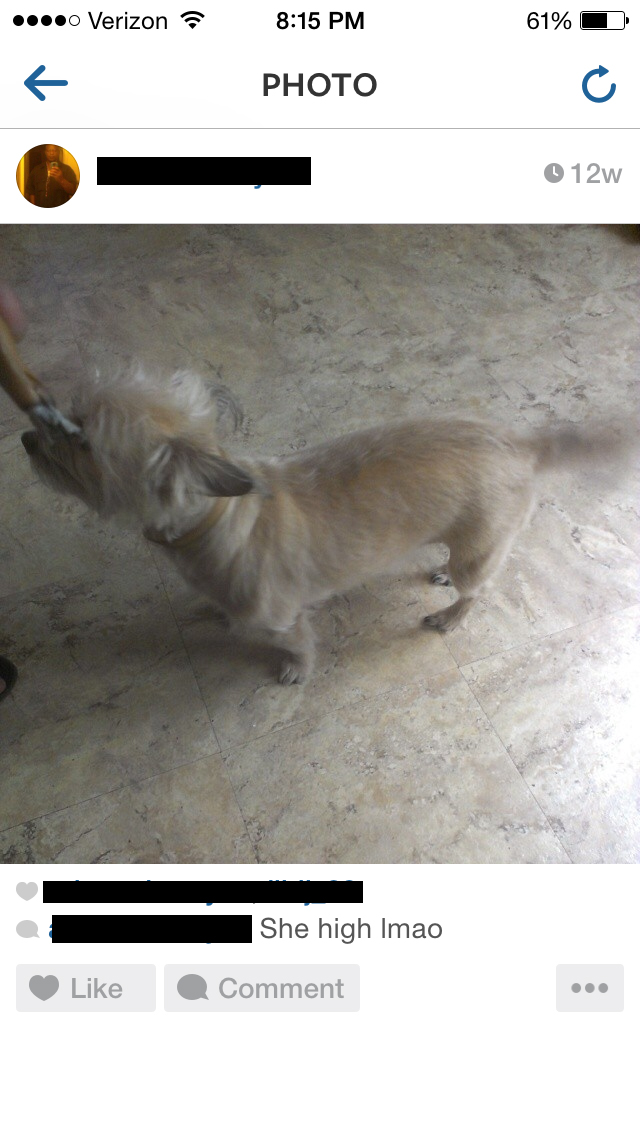 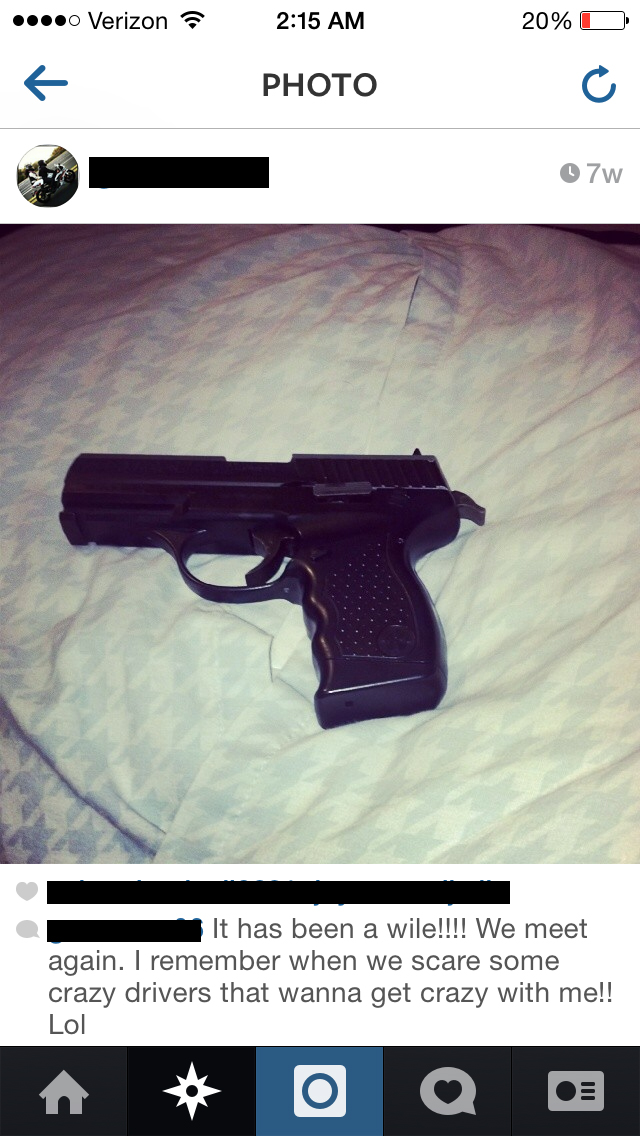 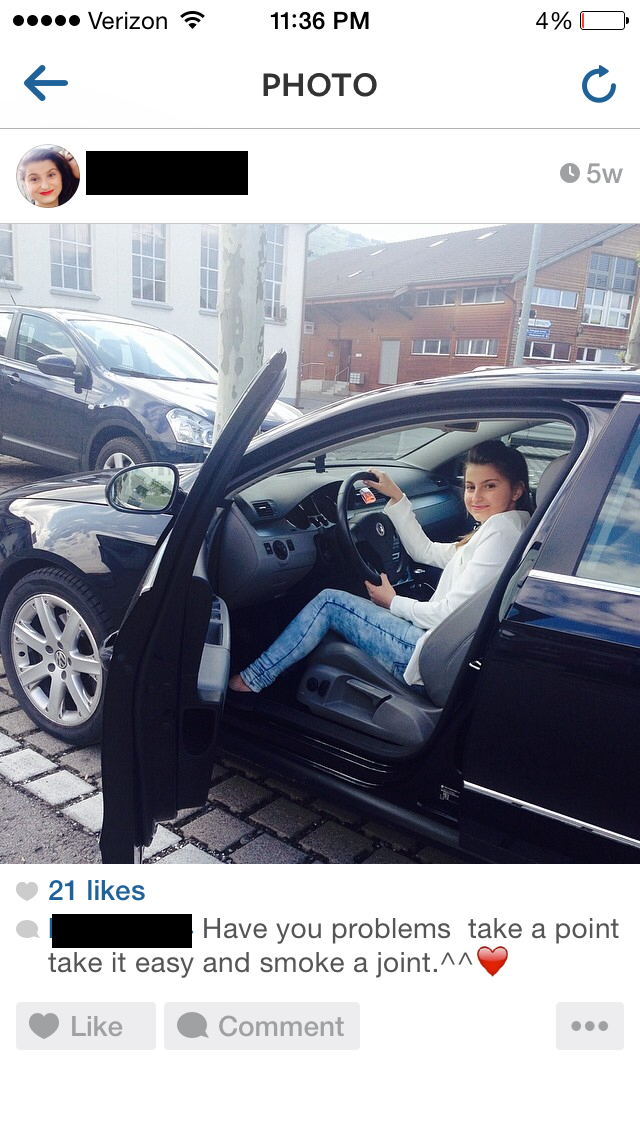 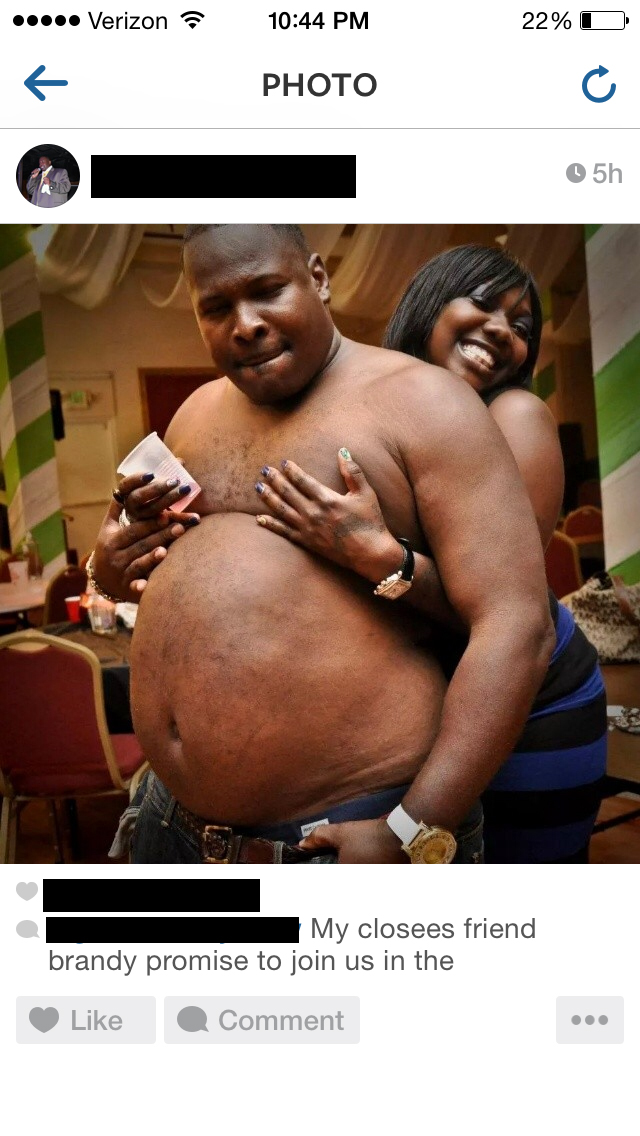 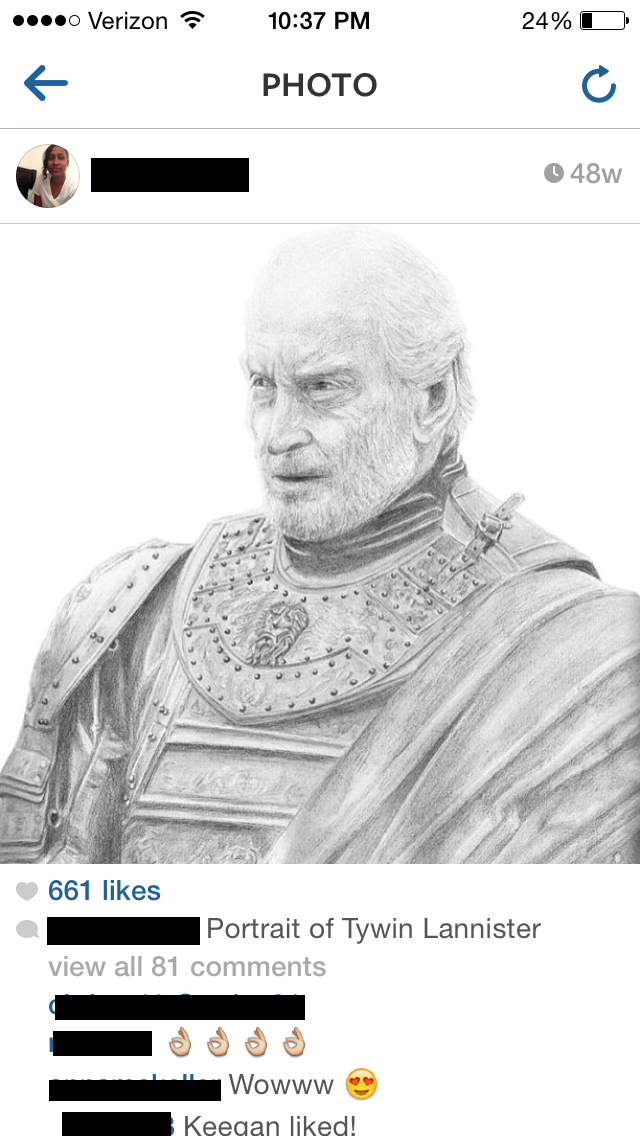